Switching energy generation from fossil fuels to sustainable alternatives, such as photovoltaics or wind power, leads to fluctuations in the amount of energy produced. The fluctuations are by virtue of seasons, time of day as well as the general weather conditions. The surplus electricity produced at particularly sunny or windy times can be stored to be available at times of less wind or sunshine. To store the excess electrical energy, it is advisable to first convert it into chemical energy. This energy transformation is usually carried out through electrolysis, where water is converted into hydrogen and oxygen. Hydrogen can serve as an energy storage and, if necessary, be converted back into electrical energy or used to produce value-added chemicals. This chemical conversion is advantageous if the hydrogen is not used on-site and in a timely manner. Since transport and storage of hydrogen is demanding, it is practical to convert the hydrogen into a more easily to handle chemical for energy storage. One of these reservoirs is methanol, which can be further used as fuel or platform chemical. 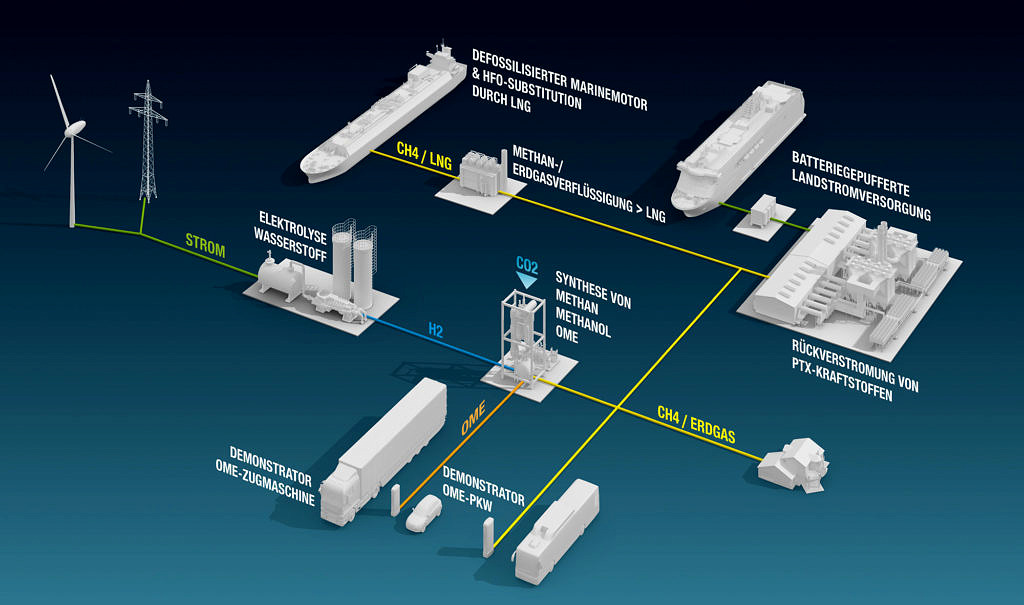 As part of the E2Fuels project, methanol synthesis from regenerative hydrogen will be further investigated. The carbon source for the formation of methanol is CO2, which can be separated, for example, from industrial exhaust gases. The reaction is limited by an equilibrium and therefore requires an expensive gas recycle.
Part of the E2Fuels project is the removal of methanol from the equilibrium by means of in-situ sorption to significantly increase the methanol-yield. For this dynamic methanol synthesis, optimized absorption fluids are developed for long-term use as well as catalysts are adapted. This is done in a novel facility to optimize the reaction in terms of activity, yield, selectivity, dynamics and efficiency. In cooperation with industry, a large-scale plant for the production of methanol from regenerative hydrogen and CO2 from industrial waste gases is being built.

This project receives funding from the Bundesministerium für Wirtschaft und Energie (BMWi) under the support code 03EIV011B over a duration of 36 months.