State of the art

In the last decade, much attention has been paid to the desulfurization of fossil fuels. Due to environmental regulations fossil fuels have to be desulfurized to very low levels. The currently permissible sulfur content in gasoline and diesel is limited to 10 ppmw in the EU. Currently, the technology used for this purpose is hydrodesulfurization (HDS). In HDS sulfur compounds are hydrogenated to hydrogen sulfide and a hydrocarbon rest (equation 1).

However, for this technology, harsh reaction conditions are necessary to remove sulfur content in fossil fuels to the very low demanded levels. For this purpose, depending on the liquid fuel, temperatures of 330-400 °C and hydrogen pressures of 40-100 bar are required. These high temperatures and hydrogen pressures are necessary in order to also remove compounds such as benzothiophene, dibenzothiophene and its derivatives, which are more difficult to remove from liquid fuels compared to sulfides and thiols. Since these harsh conditions and huge amounts of hydrogen are undesirable (note that 90 % of the hydrogen produced is currently obtained by steam reforming of fossil fuels!), there is a big interest in efficient, alternative hydrogen-free desulfurization methods.

Oxidative desulfurization (ODS) is a promising alternative approach, which circumvents the problems mentioned above. In ODS, the organic sulfur compounds in the liquid fuel are oxidized with the help of a catalyst and an oxidant to sulfoxides and/or sulfones. The oxidized products are significantly more polar and can thus be extracted in a separate separation step with a suitable extraction solvent. In contrast to HDS, very mild reaction conditions are sufficient for ODS with temperatures of 30 to 120 °C. Suitable and promising catalysts for the oxidative desulfurization are polyoxometalates. As the oxidant, hydrogen peroxide is the most widely used in ODS. However, some studies already showed that it is also possible to use less expensive and environmentally benign oxygen/air as oxidizing agent in ODS.

In the research group “biomass and sustainable production of bulk chemicals” we are dealing with a variant of the oxidative desulfurization, the so-called extractive-oxidative desulfurization (EODS). In this concept, the organic sulfur compounds in the liquid fuel are oxidized and extracted in-situ from the oil phase into the aqueous phase. Hereby, water-soluble polyoxometalates and oxygen are used as the catalyst and oxidant. Our recent studies show that it is possible to selectively oxidize organic sulfur compounds in the liquid fuel to water-soluble sulfuric acid and sulfonic acids. These oxidation products are extracted already during the oxidation reaction in-situ into the aqueous polyoxometalate catalyst solution. This approach eliminates an otherwise necessary downstream extraction. 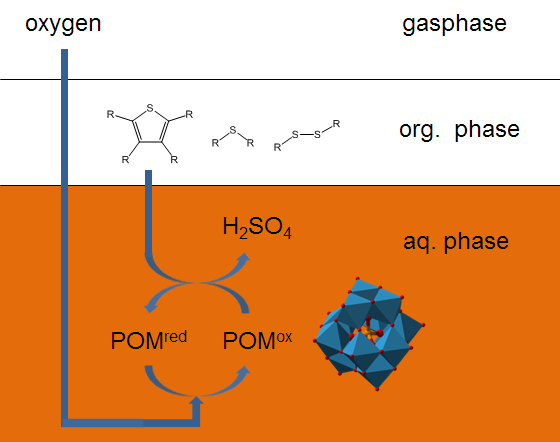 This project is funded by the “Deutsche Forschungsgemeinschaft (DFG)” under the AOBJ: 615076 for a period of three years.