In order to overcome the major drawback of homogeneous catalysis efforts have been made over the past decades to heterogenise or immobilise the catalysts. Both the SHOP and the RCH/RP process have shown the potential of two phase catalysis with transition metal complexes. Several other immobilisation techniques have emerged over the last years in academia and industry. At the CRT, catalysis research is focussed on the homogeneous catalysis, biphasic catalysis and supported phase catalysis. 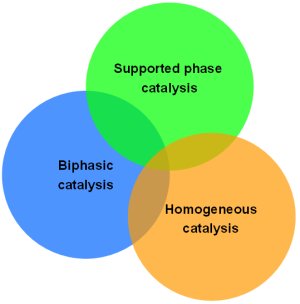 The homogeneous catalysis research at CRT includes, if necessary, the synthesis and characterisation of transition metal complexes. In a first step, the catalysts are then screened with respect to their activity and selectivity in classical solvent systems. Standard test reactors include glassware (Schlenk-tubes) and batch autoclaves (50 ml to 1000 ml).

The most promising complexes are tested in ionic liquid biphasic systems in order to further increase the catalyst performance and to facilitate the product separation and catalyst recovery. Suitable ionic liquids are pre-screened using the COSMO-RS software. The substrate solubility should be high enough to ensure good reaction rates while on the same time the product solubility should be low in order to extract the product in situ and avoid consecutive reactions. The best systems are then investigated with respect to their kinetics and catalyst recycling. The underlying mechanism of the biphasic catalysis and the rate determining steps of such a process are investigated by choice of appropriate experiments. 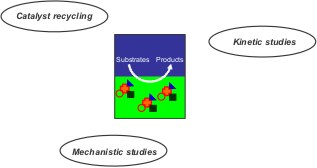 In the last step of biphasic research the batch process is, if required, transferred into a continuous process in order to simulate recycling, accumulation of poisons and catalyst stability. These investigations are conducted in miniplants designed and manufactured in the CRT workshop.

If applicable, the ionic liquid catalyst solution is dispersed on porous support materials to yield SILP catalysts. These are studied in continuous operation and under steady state conditions.