One-Reactor concept for efficient hydrogen storage and release in LOHC

One-Reactor concept for efficient hydrogen storage and release in LOHC

For the purpose of a complete switch to renewable energies, the expansion of storage capacities and transportation technologies is indispensable. A promising energy carrier is hydrogen, since it can be produced from renewable sources and, in contrast to carbon-based fuels, it does not release carbon dioxide while being used. However, storing hydrogen by compression or liquefaction is associated with high energy demand and costs. Alternative storage concepts, such as liquid organic hydrogen carriers (LOHC), which can chemically bind and release hydrogen through hydrogenation and dehydrogenation, offer great potential to overcome these limitations. The reversible binding of hydrogen simplifies the handling of the energy carrier and allows the use of existing infrastructure for transportation.

In first implementations of the LOHC technology, the storage and release of hydrogen are performed using different temperatures, pressures and catalysts. For stationary applications, where loading and unloading of the LOHC are performed at the same location, a more compact and efficient concept was developed at the Friedrich-Alexander-Universität Erlangen-Nürnberg. This concept enables hydrogenation and dehydrogenation in a single reactor, as it involves the same catalyst at a constant temperature level. The direction of the reaction is influenced by pressure and degree of hydrogenation. One single reactor reduces investment costs due to lower equipment requirements. Furthermore, operating costs can be saved by avoiding additional reactor heat up or cool down when switching from hydrogenation (exothermal) to dehydrogenation (endothermal). Additionally, with the one-reactor setup heat integration between product stream and fed LOHC is possible.

In this project, a pilot plant is built and operated at the Energie Campus Nürnberg. The concept is evaluated by varying operation conditions, such as temperature and pressure levels, flow schemes and split fractions of the liquid recycle. Examinations of the achievable degrees of hydrogenation, reaction rate, regeneration of the catalyst, long-term stability of the LOHC and flexibility of the system play an important role for a future implementation and provide necessary information for plant automation. 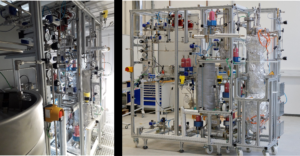