Heterogeneous catalysis is one of the largest application principles of catalysis in industry, since the reactants (and products) and the catalyst are separated by a phase boundary. The catalyst usually is a solid material, whereas the reactants are gaseous or liquid substances. This makes separation of the product and recycling of the catalyst very easy and allows for efficient processes on large scales.

Since heterogeneous catalysis is a surface controlled process, physical transport processes of substrates (and products) to (and from) the active centre can significantly influence the overall reaction rate as well as the selectivity. The interplay between intrinsic kinetics (microkinetics) and transport processes is referred to as macrokinetics. Designing a catalyst to suppress transport limitation on the one hand and enhance activity/stability on the other hand is a major field of research at CRT. 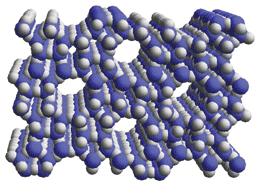 Modell of a zeolithic material.