Due to the scarcity of fossil fuels, technologies for the generation of renewable energies (solar and wind energy) are being further developed and expanded. However, the temporally and spatially fluctuating availability of these forms of energy represents a decisive disadvantage compared to oil and gas. Therefore, efficient storage as well as transport technologies are required to ensure a uniform energy distribution. Green hydrogen will play an increasingly important role as a secondary energy carrier, both in industrial (> MWh) and automotive (120-200 kWh) applications.

LOHC (liquid organic hydrogen carrier) represent an attractive class of compounds for the storage and release of hydrogen. These liquids circumvent the problem of physical storage of hydrogen, which requires very high pressures (300 bar) or low temperatures (22-45 K). Likewise, the infrastructure already in place (tankers, ships, trains, etc.) is a significant advantage in using LOHCs as storage molecules.

Benzyltoluene (BT), a hardly flammable liquid, can be used as LOHC in this context. The loading of discharged H0-BT with six times the molar amount of hydrogen takes place catalytically under elevated pressure and temperature in an exothermic reaction. This produces the charged H12-BT, which enables the storage as well as the transport of energy. When energy is required, the hydrogen is released catalytically, in an endothermic reaction at a lower pressure level. The released hydrogen can in turn be fed into a fuel cell or combustion chamber for energy utilization, for example. 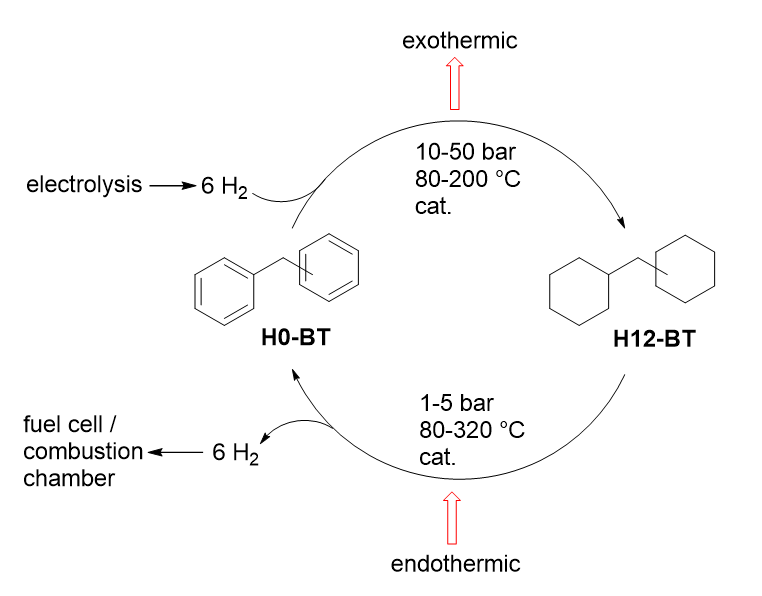 The focus of research in this project is on the efficient release of hydrogen from H12-BT in order to make it applicable in automotive applications, for example. For this purpose, a catalytically activated heat exchanger based on a Pt/Al2O3 catalyst system will be developed.

The project is carried out in collaboration with and with funding from Umicore S./A.